William Wordsworth, one of the most recognized Romantic poets, one said, “Poetry is the spontaneous overflow of powerful feelings: it takes its origin from emotion recollected in tranquility”(Wordsworth, www.goodreads.com). The Romantic era in art and literature originated in Europe at the end of the 18th century and lasted until the 1850s. Romanticism was a reaction to the ideas of the Industrial Revolution and its scientific approach to the human’s nature.

We Will Write a Custom Essay Specifically
For You For Only $13.90/page! 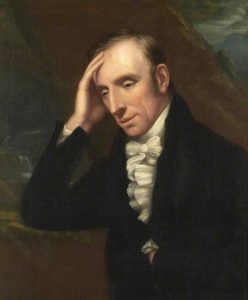 Romanticism accentuated emotions and individualism. It was a revolution in all forms of art: painting, literature, music and theatre. Johann Wolfgang von Goethe’s The Sorrows of Young Werther, a novel about a young, sensitive and passionate artist, who suffers deeply because of unfulfilled love and commits suicide, became one of the most prominent works in Romantic literature.

Poets such as William Wordsworth, John Keats and Lord Byron wrote under the notion of being the “chosen” ones who could interpret reality and provide guidance to people in post-Revolutionary Europe. Inspired by nature they encouraged everyone to open their minds and hearts to experience new feelings. To them the world was full of unlimited potential. (Lundi)

One of the key themes in Romantic poetry was the concept of the sublime experience. Edmund Burk defines sublime as “a quality of art or experience that excites the idea of pain and danger, that produces the strongest emotion that the mind is capable of feeling and that causes astonishment, horror, terror, (…) the inferior effects are admiration, reverence and respect” (Philosophical Enquiry Into the Origin of our Ideas of the Sublime and the Beautiful).

John Keats wrote “La Belle Dame sans Merci” in 1819, a very emotional time in his life. His brother died of tuberculosis, and Keats himself began to show signs of the disease. He fell in love with Fanny Brawne and wrote “La Belle Dame sans Merci” while experiencing poetic love inspiration but growing ill and feeling the death hanging over him. The fantasy ballad tells a story of a dying knight describing his experience of meeting a beautiful lady who seduces him and leaves him alone to his death. The sublime is used to excite the knight’s thoughts and emotions of joy and fear of the beautiful girl. At first, the knight is enchanted by the girl’s physical appearance:

I met a lady in the meads,
Full beautiful- a faery’s child,
Her hair was long, her foot was light,
And her eyes were wild.

He believes she loves him. The joyful and happy moments end when the knight enters the girl’s grotto, where she lulls him to sleep. The knight has a frightful dream of fearsome kings, princes and warriors like him, who are warning him of the woman’s intensions and his fate.
The sublime experience of meeting the beautiful woman made the knight happy at first. He truly believed he has found true love. But then he realized that the beautiful girl is merciless and dangerous, and he is going to die. He is lost and abandoned.

Keats uses language to paint a picture of an emotional and vulnerable knight. The words are chosen carefully to express the feelings of the knight. The ballad is rich in flower imagery with symbolic meaning. Most of the flowery imagery symbolizes the knight’s love for the beautiful lady:

I made garland for her head,
And bracelets too, and fragrant zone:
The “garlands” and “bracelets” symbolize the love, while “fragrant zone” has a sexual connotation.
Keats also uses the flowers to express the knight’s desolation and fate.
I see a lily on thy brow,
With anguish moist and fever-dew,
And on cheeks a fading rose
Fast withereth too.

Lilies represent death, so the image of them accent the sense of loneliness and despair. Roses are associated with love, but the knight’s “fading rose” means that his love for the lady is also fading away. The repetition of the word pale emphasizes the lack of color and makes the knight believe in the harrowing warning of his fate.

I saw pale kings and princess too,
Pale warriors, death-pale were they all;
They cried-‘La Belle Dame sans Merci
Thee hath in thrall!’.

Keats’ ballad starts like a fairytale: a knight meets a beautiful lady and falls in love, only to take an awry turn. The happy and magical experience of love and enchantment experienced by the knight turns into a nightmare, the ultimate sublime experience. Keats wrote this ballad under the great influence of Edmund Burk and his philosophical theory of the sublime. Without a doubt, Keats’ writing was also influenced by his short and tragic love to Fanny Brawne, the goddess he worshiped and his muse. “La Belle Dame sans Merci” describes Keats’ pain of knowing he is dying and leaving Fanny alone.

Haven't found the Essay You Want?

Get your custom essay sample

Would you like to get such a paper? How about receiving a customized one?